skip to main | skip to sidebar

A bollywood love story – the first half

When I set foot in Delhi almost 3 years ago (July 2006 to be precise) , I hated the city.
A few weeks after I came here a friend of mine asked me how I was finding the capital city; I remember my reply “shallow and hollow”. I was being honest in my opinion.

The streets were dirty, the buses were crowded and filthy, everything was overpriced (atleast by kerala stds), u always had the “south Indian” tag attached, the heat was unbearable (July is not really the best time to make your debut in Delhi), I seemed to be eating aloo or paneer for every single meal and I was staying so far away from home (knowing I cant just pick up my bag n go like I used to do in college was not very comforting) and the flight tickets were not cheap either – I despised Delhi, and was more than eager to get out(Bangalore was where I wanted to be since all my college friends were there).Used to the “save, save and save some more” (so that you can splurge on a grand house or a big wedding) attitude in kerala, I used to watch the “spend as much as you can” attitude of people here with a smirk. ”I don’t belong here” – I decided.

I did attempt a few times to shift my job n 2007, but nothing worked out and 2008 was a hectic year and I didn’t get much time to fret.But now, after a little more than 3 years spent here, I have realized that the city has slowly grown on me (Though I shifted to noida in Dec 2008 and is technically in UP). If Mumbai was love at first sight, Delhi was the slower version.

Buses are still as bad – but the metro will soon come up, the summers are equally horrible. But...
The crowded streets of chandni chowk with all those yummy street food, the cold winter mornings (i need a motivational speech playing at full volume to just get me out of the rajai), the smell of baking when you walk in front of Wengers in CP (I have done that only once, but it still lingers on), getting lost every time I visit Lajpat Nagar market, all those flyovers (especially the one near aiims where you find curious looking sculptures), the relief you feel when it rains after weeks of the hot summer sun , the labyrinth of roads in the Janpath area(i have not yet understood how people find their way there) , the musical fountain at akshardham temple, the silence inside lotus temple, the golgappes,aloo chats,ram ladoos , paranthes in the paranthe wali gali(how can I forget food)– all these and more
And a stroll along rajpath on a winter evening (attempting that in summer is suicide) followed by a spicy dinner at andhra bhavan – bliss!!!!

And I have made a quite a few friends; a very diverse group indeed - I have the luxury of sitting on my lunch table with 10 people –from 8 different states of India.

And I have relaized that I do love the city now and that Bangalore really doesnt cut it except for the weather maybe ;-) Just like those intermissions in bollywood movies when the hero and heroine realizes ;) the second half lies ahead, I guess it ought to have a happy ending ;D
I regret the fact that I have not seen much of Delhi even after all these years, but I intend to catch up once the metro is up and running (I have a metro station a few minutes walk from my pg, that should help )

I had this post in mind for so long , but what finally pushed me to post it? Maybe “The white tiger” I read last week or “The city of Djinns” I am reading currently. 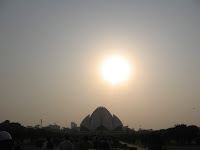 And my roomie of 3 years finally decided to leave me in peace and migrate to greener pastures (Read a phd in US) and I do miss my partner in crime.
My waistline stands proof to it (i would have liked to add my bank balance too reflects it, but it shows no sign of improving whatsoever)
Posted by Anphy at 3:13 AM

hmm...So your hate towards Delhi is now turning into a love. What is going to be the second half?

wow...that was good..
i walked through my life in delhi reading that..

Anphy
Its tough being me, but I still try ;-)